I was in Ulta the other day picking up a few things and naturally browsing mascaras (as I always am). The sales assistant on the floor came over to ask if she could help me find anything, which got us into talking and laughing about the never ending search for the perfect mascara.

Guys....it doesn't exist! I mean but really, how terribly hard can it be to invent a product that lengthens, volumizes, separates, stays on and actually keeps doing what it's supposed to do until it's time to buy the next tube?!

So the answer is and will always be no, I haven't yet found the perfect mascara. BUT I have tried quite a few lately (some that I do really like). Here's how 5 of the top-rated mascaras break down in my book. 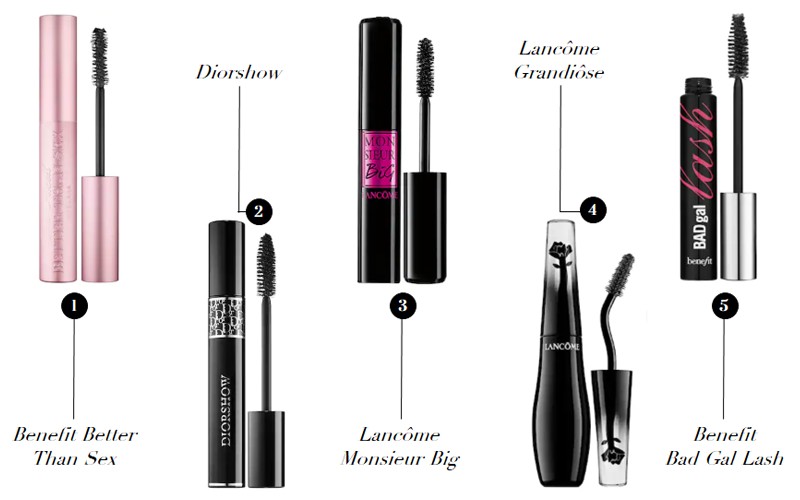 I so desperately wanted to love Benefit's Better Than Sex mascara. It's ridiculously close to being the perfect combination of everything I was looking for in a mascara, but it falls short in one major category: flakiness.

I put this mascara on in the morning, half of it is IN my eyes by 10am, and the rest is under my eyes by noon. I don't use waterproof mascaras because I don't have 10 minutes every night to remove my mascara, so I really can't speak to the waterproof versions of ANY of these. That being said, a non-waterproof mascara should be able to hold its own...don't you think?! It has so, so much potential because the separation, volumizing and lengthening are all on point, but the flakiness is a killer for me. You can't love a mascara that doesn't last, so I'm giving this one a 7.2.

What I like:
+ Separates (which I personally think is super hard to find!)
+ Volumizes
+ Lengthens
+ Nice dense black color Diorshow was a total, on-a-whim purchase while standing at the Sephora checkout line. The girls standing in line next to me were talking it up, the salesperson said it was great (or so she heard), and so I was like, why not?

I'll tell you why not: because it sucks. Over the years I've found that I prefer the thick, bristled brushes (which Diorshow has) and so I thought that, combined with a few great reviews would make it worth its while. Not the case with this one.

Diorshow lacks majorly in the volume department, and I felt like I would've needed 3+ coats to be halfway satisfied. Additionally, it gave my lashes a stiff, almost 'crunchy' texture, which should never happen with a good mascara. Lastly, this is another one that just doesn't stay on...I had smudges under my eyes by midday.

I actually first tried out Lancôme's Monsieur Big thanks to you guys! After asking for your top mascara recommendations on Instagram Stories, this one got an overwhelming response as one of your favorites.

The qualities I love about this mascara are comparable to Better Than Sex. It has a super thick, bristled brush which helps to separate, volumize and lengthen (although a little more umph in the length department wouldn't hurt!). All in all, it's my favorite of the 5 in this post.

The only things I don't love are that it can be rather hard to get off, especially as a non-waterproof mascara (but I guess that's better than it coming off in hours like the others), and also that it dries out rather quickly. Ultimately, however, I plan to restock this and continue using until I find the next best thing!

What I don't:
+ A bit hard to get off for a non-waterproof
+ Tube dries out quickly I purchased Lancôme's Grandiose in conjunction with Mr. Big, since it was another that had pretty good reviews from you guys on Instagram. The first time I tried it, I didn't love it and thought that I would definitely be returning it. However when Mr. Big dried out after a few weeks and I was left with no mascara, I decided to give it another go.

The curved wand was a bit odd to get used to at first, but I actually ended up finding the shape really convenient after a few uses, making the application easier. I bumped its rating down a bit from Mr. Big however, because it doesn't quite live up to everything I look for in a mascara (although it does get the job done and I do like it).

I don't love the plastic bristles and much prefer natural, long ones. I tend to find that mascaras with plastic bristles are more likely to clump, which I do see with this mascara. I sometimes use a dry mascara brush to brush out my lashes after applying, to help separate them (which usually does the trick). As for the length and volume, it does a pretty good job. That being said though it's just not anything I'm super impressed with.

What I don't:
+ Tends to clump
+ A bit hard to get off for a non-waterproof
+ Doesn't lengthen and volumize enough

Bad Gal Lash is one of my OG mascaras. I used it all through college and recently decided to give it another try since it had been one I really loved. To my surprise though, I didn't love it as much as I did on the second go-around.

While I love the big, thick-bristled brush, I felt like it just didn't deliver like it used to. Like Grandiose, this is another mascara that's good enough and gets the job done, but it just isn't incredibly great.

Bad Gal Lash does do a great job of lengthening and is pretty good in the volume department. During the first few uses, it sometimes clumps though, so that dry mascara brush comes in handy. What I really didn't love is that with a few coats, it started to clump. The formula also seemed to dry out quicker than it should've.

What I don't:
+ Tends to clump
+ Dries out quickly So that's the rundown, and yes, I'm still on the hunt for that perfect
mascara. Would love to hear your recs in the comments below!

My Beauty Philosophy: Where I Save &…

All Day Hydration for Your Face with…

Shining Bright with Smile Brilliant + A…